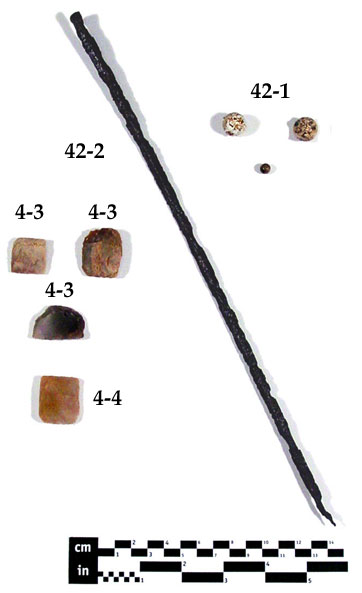 Gun parts recovered at Mission San Luis provide a provacative picture of firearm acquisition and use at the site. Equipment sent to the colonies, and particularly hinterland settlements, was not current by European standards. Although flintlocks (escopetas) had almost completely replaced machlocks (arcabuces) in Spain by the second half of the seventeenth century, matchlock parts are still common at Mission San Luis. Also, despite the tight controls on colonial commerce mandated by the Spanish Crown, its inability to provide sufficiant supplies resulted in clandestine trade as evidenced by the recovery of British gun parts in both Spanish and Apalachee areas of the site.

Since guns were rarely lost, and were not discarded unless they were beyond repair, the recovery of gun parts is relatively rare at Mission San Luis. Those fragments that are found include gun barrels, broken lock mechanisms, and related supplies including lead shot and gunflints.

Almost all of the gunflints recovered at Mission San Luis are spall-type gunflints rather than classic European prismatic gunflints (Drawer 42). Shot is classified by its size or caliber (diameter of ball across the widest point of seam, avoiding the sprue) (Drawer 42). Larger projectiles include bombs, grenades, and cannon balls.