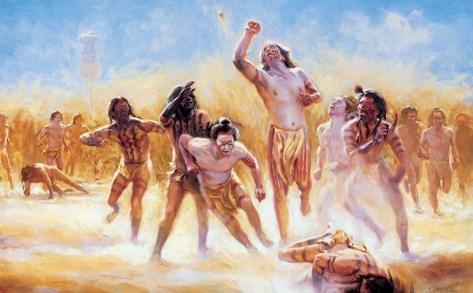 For thousands of years before the arrival of Europeans, the people who would one day be called Indians lived throughout the North and South American continents. Many of them went through a series of changes over time – from simple groups that depended only on hunting game and gathering wild plants for food to more complex tribes that grew their own food. Some Native Americans eventually developed organized societies that rivaled those of Europe. The Apalachee Indians, who lived in the area around present-day Tallahassee, were among the most advanced and powerful of the Florida tribes that were met by early explorers.

Before contact with Europeans, the Apalachee Indians planted corn (maize), beans, and squash, adding to this diet wild game, fish, wild fruits, berries, and nuts. These farmers built groups of palm-thatched huts close to agricultural fields where men, women, and children tended crops. In fact, the word Tallahassee is derived from the Muskogean language's word for "old fields."

Most work was assigned by gender and custom. Women did most of the farming, gathering of food, and food preparation. Men hunted wild game, fought in wars, and assisted in building and maintaining the villages. Childrearing was shared though much of the burden fell to women. Children worked alongside the adults, learning skills needed for everyday life. Still, children had time to play – boys shot arrows from bows; girls made baskets and clay pots. Everyone played ballgames, even the women. 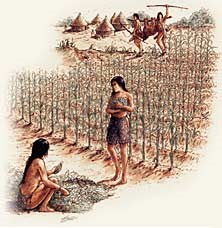 Apalachee society was well-organized and ruled by "chiefs" (holatas) who inherited their positions and were guided by priests. Gods representing natural forces guided the Apalachee religious beliefs and worship ceremonies. The sun, moon, rain, and thunder were thought to be divine since these were needed for growing food.

The Apalachee built large villages that included earthen "platform" mounds and plazas where religious and cultural ceremonies were conducted. They participated in a far-reaching trading network that brought them things made or gathered by other Native Americans beyond Apalachee Province – the metal copper is one example.

An Apalachee family placed more importance on the mother's relatives than the father's kin as was usually the custom in Europe. Native clans or extended families took the names of animals – deer, bear, snake – or natural forces – wind clan, for example. When an Apalachee man married, he resided with his wife's clan.

Apalachee chiefs traced their inherited positions of power through their female relatives. When a chief died, his oldest sister's oldest son inherited the position of chief. This custom granted more cultural status to Apalachee women than European women. Before their Christian conversion, chiefs might also have been the religious leaders of their people. The Apalachee chiefs governed villages and nearby fields and forests. The chief of San Luis was one of the most important in the province. Europeans described the size of San Luis as extending for miles around.