England and Spain Fight over Slaves and Land 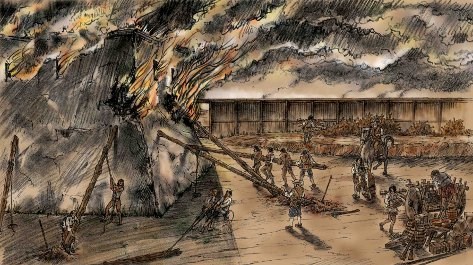 This Atlantic coastal village attracted settlers from the United Kingdom and its colonies, including Virginia and Barbados. It grew rapidly, and became a thriving commercial and military outpost on the English–Spanish colonial borderlands. Much of its riches came from buying and selling Africans in the Charleston slave market.

In 1687, English slaves began running away from Carolina plantations to seek freedom in St. Augustine. Spanish King Carlos II granted slaves' freedom provided they became Catholics and obedient subjects. Even though the Spaniards practiced slavery, the King had a practical reason for freeing African slaves in 1693. The La Florida colony received new settlers while the English colony had fewer residents.

This practical act of humanity caused feelings between Spain and England to grow worse. The English slave owners demanded the return of their "property." Spain did not do so. In 1701, England declared war on Spain and France. Historians named it the War of Spanish Succession in Europe, but Queen Anne's War in North America.

Battles between the American colonies of La Florida and Carolina nearly wiped out the Indians of Spanish Florida and southern Georgia and destroyed Spain's network of over 100 missions. Five hundred English militiamen and 300 of their Indian allies attacked St. Augustine in 1702, burning the town, but failing to capture the Castillo de San Marcos. Most of the Spanish villagers and mission Indians survived inside the fort.

Mission San Luis was the best protected village beyond St. Augustine, and the English militia did not attack right away. With their Creek allies, English soldiers burned down the remote Spanish mission villages and killed or captured most Florida natives. Timucuan Indians in eastern Spanish Florida and Apalachee in the west were killed or enslaved in the English and Indian raids of 1703–1704. Most Apalachee who survived the English-led raids moved north and were settled on a Savannah River reservation.

By July 31, 1704 the English had marched very near Mission San Luis. Rather than allow the fort to be captured, the Spanish and Apalachee villagers burned all the buildings and fled. A few Apalachees traveled with the Spanish families to St. Augustine. About 800 Apalachees fled west from Mission San Luis to Mobile, a French village where they settled for a time.